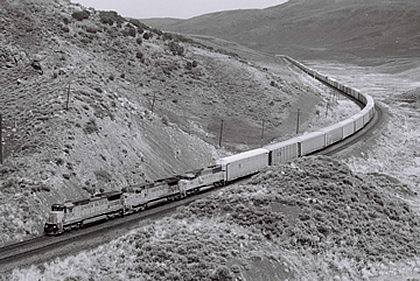 Hell on Wheels
Bear River City, Wyoming - April 2000
As the rails of the first transcontinental railroad
moved through Wyoming in 1868, towns sprang
up at the end of the tracks almost overnight
offering entertainment, gambling, and drink to
all takers. Most towns lasted just weeks as the
tracks moved westward. Due to the transient
and rowdy nature of the inhabitants, these
locations became known as Hell-on-Wheels towns,
and Bear River City was one of the worst. The
town vanished quickly, its economic prospects
dashed, when nearby Evanston was chosen for
the location of a roundhouse and shops.