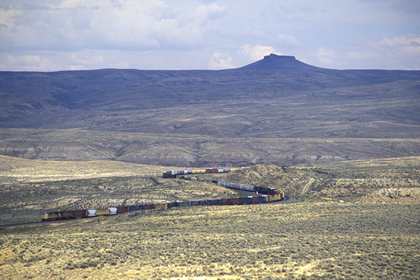 Pilot Butte S-Curve
Peru, Wyoming - September 2005
The name Pilot Butte can be traced to fur trader maps as early
as 1837. While the specific origin of the name is steeped in pioneer
lore, it likely came from the landmarks usefulness as a guide post.
Located in southwest Wyoming, hundreds of thousands of emigrants
and travelers heading east and west in the mid nineteenth century
were guided by its relief against the surrounding countryside.
Its appearance also meant they were nearing the Green River,
a location that usually afforded water, grass for the livestock,
and a place to take stock of their travels.