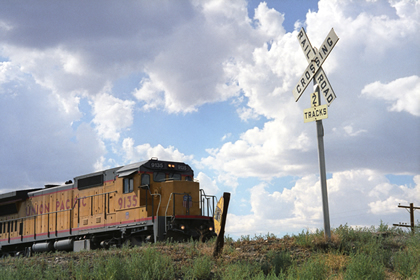 Crossbuck
Fort Steele, Wyoming - August 1998
Big Sky Country is the well known moniker of neighboring
Montana, perhaps only because Wyoming didnt think of it first.
Under big Wyoming skies did the United States build Fort Fred
Steele in 1868, the same year during which most of the original
transcontinental railroad was constructed through southern Wyoming.
The federal government, often in conjunction with the railroad, used
the fort and its personnel to quell disturbances from Native Americans,
as well as white workers and settlers that disrupted the building of the line.