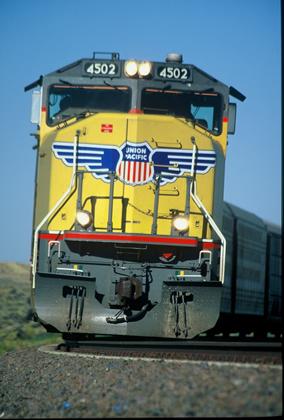 Wings
Peru, Wyoming - July 2004
Back by popular rail-fan demand, the ten-foot wide
winged shield was reapplied to all "wide-nosed" Union
Pacific locomotives in 2000 after its first appearance during
the Streamliner era. The UP is the longest surviving big
railroad in name (1862, though changed from UP Railway
to UP Railroad in 1897 during a reorganization), in emblem
(1892; derived from the original U.S. flag, including
all 13 stripes), and diesel color (1934; Armour yellow).